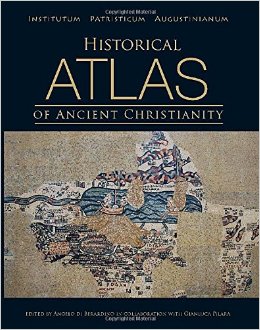 You are cordially invited to a

(Select from the following times/locations)

The maps included in the Atlas document the spread of Christianity and its growing influence in the ancient world from Africa to England, from Spain to Asia. They provide key evidence for the existence and distribution of Episcopal sees in various geographical areas. The atlas demonstrates how this growth and development was affected by forces inside and outside the church, such as the roman or Byzantine government or the barbarian invasions. It also includes extensive bibliographies for scholars, pastors and lay persons to use in furthering their own study. The contents of this volume are designed to serve the academy and the church, pastors and lay persons alike who want to know more about the world of the ancient church.

This volume is being offered

Augustinian Father Angelo Di Berardino is the President Emeritus of the Augustinianum in Rome. He has authored numerous works on patristics including the Encyclopedia of the Early Church and Patrology: The Eastern Fathers from the Council of Chalcedon to John of Damascus. He also edited

Volume 5 of the Ancient Christian Doctrine Series, “We

Believe in One, Holy, Catholic & Apostolic Church,” and serves as General Editor for the Italian edition of the Ancient Christian Commentary on Scripture.

ical organizations and theological faculties. During the sum- mer months he assists pastors in the Archdiocese of Los Angeles and has regularly visited the Diocese of Trenton during his time of research at the Center for Theological Inquiry of Princeton Theological Seminary.

The Parish of Saint Mary